Situated on Queen Street, right in the heart of Cardiff, Queens Arcade houses some of the city’s most exciting and well known stores and independent boutiques, plus a range of sports specialist brands. The brief we were given for this project was for a wall wash effect for two corridors and the central rotunda area of this covered shopping mall in central Cardiff. Having carried out a site survey and after several meetings with the designer we were able to achieve this by using a high output wall wash system which consisted of 1 watt constant current LEDs which we made up into bespoke 1200mm long modules. These modules were then mounted on to the walls of the shopping mall and installed into existing alcoves. All these were controlled from one central pc-based control unit. However, this control unit was 400 yards away on the roof of the shopping mall – we therefore had to install specialised DMX signal boosters to allow control from such a long distance. The owners of the shopping mall wanted the lighting to become a focal point of the building so the system was progrmamed to run a slow cycle of the client’s three corporate colours. The system we installed illuminates the top floor walls and the domed ceiling of the shopping mall. The installation (by a 3-man team) was straightforward but due to the shops in the shopping mall being open during the day, the installation had to take place at night time and took a total of 5 nights to complete. 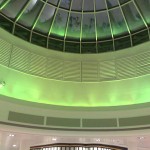 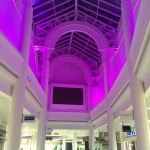