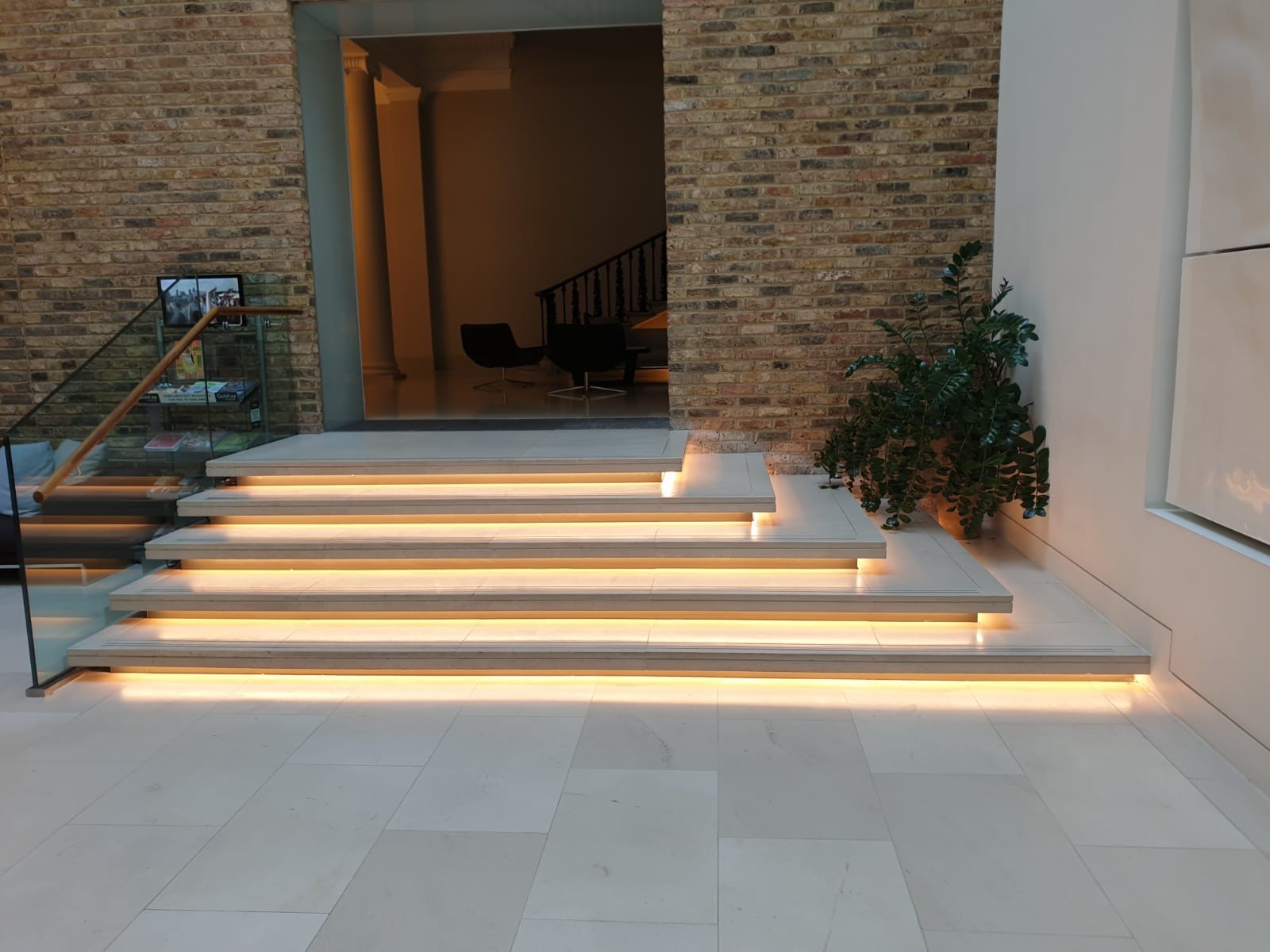 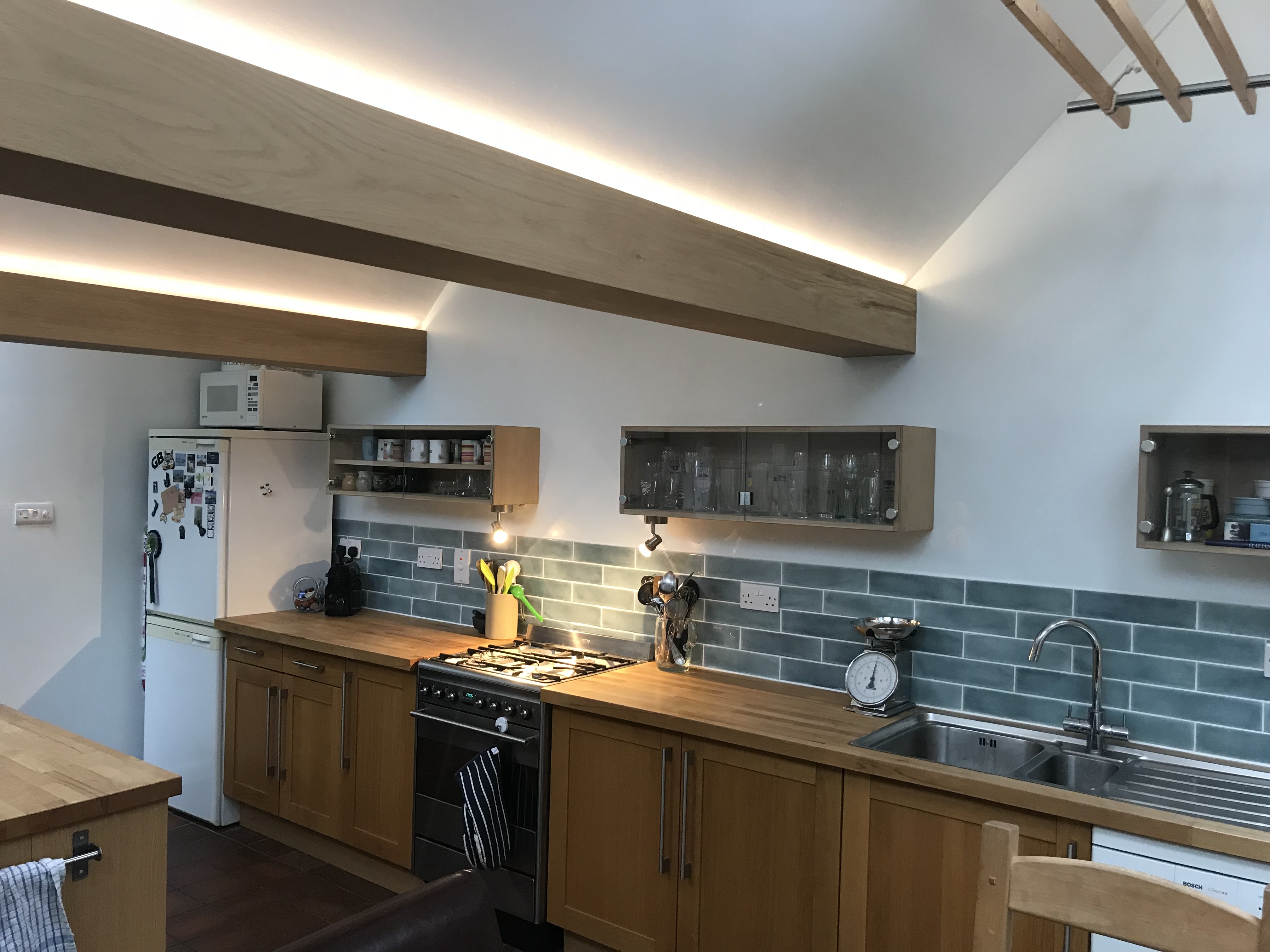 Creative lighting can transform the interior or exterior of any property and we are able to utilize our knowledge and expertise in the supply of all aspects of LED lighting.  Our aim is to focus exclusively on delivering the most innovative lighting solutions for our clients in terms of appearance, practicality, flexibility, maintenance and price.

Save money on your energy bill with installing LED lighting in your house.  We have an extensive range of high quality LED light fittings not always available on the high street. These fittings are available with different beam angles, outputs and colour temperatures so contact us for more information.

We also offer a full range of slimline aluminium extrusions and LED tape combinations which can be used for a variety of applications.  These applications include recessed lighting under kitchen cabinets, beam lighting, step lighting, wardrobe lighting and many options for producing bespoke linear lighting. If you don’t have the time or are not confident in making up the extrusion and LED tape etc., let us do the hard work for you!

If you are looking for something really individual and different for your house, then LiteTile, our bespoke illuminated glass splashback will certainly put the wow factor in your kitchen.  Available with either colour-changing or single colour LEDs and controlled by a variety of control units, our illuminated splashback combines excellent task lighting with a unique decorative feature.

If you can’t see exactly what you are looking for on our website, please do just call us or use the form on our Contact Us page and we will be happy to help you.

Why choose LiteTile for your project?

We also provide an extensive range of LED light fittings with different beam angles, outputs and colour temperatures suitable for use in all types of architectural lighting projects, so please contact us to discuss which fittings would be best suited to your project.

If you are looking for something truly different we provide a Special Finishes service – some of our LED light fittings can have RAL and BS paint colours applied to them.  We also have a range of liquid metal finishes which can be used to recreate different types of metal finish, e.g. zinc, brass, copper, bronze and gold. As well as the liquid metal finishes, we also have a “soft touch” finish, e.g. suede and leather. So if your client wants something special – just contact us for further details.

If your project involves LED lighting, we can carry out the design and manufacture of it as we work with a number of specialist fabricators.

We like to work with you on your project from the earliest possible moment so please just call us to talk through your requirements in greater detail.

We were looking for a “feature” of some sort to finish off our new kitchen when we came across LiteTile through Google. From an initial tentative contact through to the installation of the finished article, Sonja and her team were magnificent. Given this was unknown territory for us LiteTile were very patient and thorough and ensured we didn’t make any mistakes, and the finished article was made to mm tolerances and thus fitted perfectly as designed.
The finished product is brilliant, and is the first thing that everyone comments on when they come to us. It’s magnificent and I love it! For such a great feature, and with beautiful made to measure quality, it was also great value. Can’t recommend the company and product highly enough!

Our LiteTile Splashback has completed our Kitchen. The overall effect is modern contemporary, so easy to clean and looks amazing. The different lighting options really transforms the moods in the Kitchen from subtle background lighting to party mode – creating much discussions and sense of WOW!! Definitely recommend the products and the customer service!!!

From the moment I found LiteTile on a web search, to the installation and aftercare of my project I found Litetile to be extremely professional with their knowledge, experience and attitude. I would highly recommend this company and its products to anyone who wishes a first class product in their home or workplace

Great service and product from Sonja and Ian. Good information and helpful pre and post order. Good comms on timing. Fitted as requested. Control box was faulty – Ian asked me to try a few things over the phone, then re ordered one for me with no fuss when it still didn’t work. Tile is not cheap, but worth every penny. V. Impressed and would recommend product and business.

I spent some considerable time looking for a supplier who could design and fit an idea I had for some custom back-lit splashbacks for my kitchen. It turned out that LiteTile was way ahead of me and was able to offer a very professional and experienced service providing exactly what I wanted.   From the start, both Ian and Sonja had plenty of time to discuss my requirements and were able to talk in detail about any concerns I had and the solutions that they had come up with in their experience for such concerns. Although this was a small residential project, at no time did I feel I was not a top priority for them and we had numerous calls as I spoke to them about any possible question that came to mind. This was a great help as the splashbacks were a reasonable investment and something awkward to correct should anything not have been exactly as I wanted. In comparison with other suppliers I considered, they were not taken aback or dismissive of any of my questions, but simply had good solid responses based on their prior experience and specific solutions already built into their product. For example, I had questions about light dissipation, heat-sinking, water-proofing, transparency, control options, power requirements and fitting and in all of these cases they were things that had been previously considered and thoughtfully and appropriately addressed. In addition, detailed engineering drawings were provided confirming details of construction, sizings etc..After discussing the project I waited until the kitchen had been fitted (leaving power / control cables in the agreed places) then measured up for the splashbacks. Due to the tight spaces I was concerned about how accurate the panels would be to spec but I needn’t have worried as they were exactly as per the drawings. The panels took a couple of weeks to commission, assemble, test and deliver however this was on schedule as agreed. The fitters were very professional and tidy and had no problems manoeuvring and fitting these large and heavy panels in the tight space assigned to them. Overall I am extremely pleased with the result; It’s really been great.

With lighting and atmosphere an integral part of my design brief I need to find something that was both impressive and unique. We installed a LiteTile colour changing splashback and the effect was nothing short of stunning. The LiteTile’s ability to completely change the mood of the kitchen exceeded both mine and my client’s expectations.

I decided that I wanted a different type of splashback in my new kitchen and when I visited LiteTile, I realised straightaway that I had found it. The LiteTiles add a whole new dimension to the room and not only do they provide excellent task lighting but they are also a striking feature to have in the kitchen.